Response to INSIDER: 13 Things That Disappointed Me About Van Life 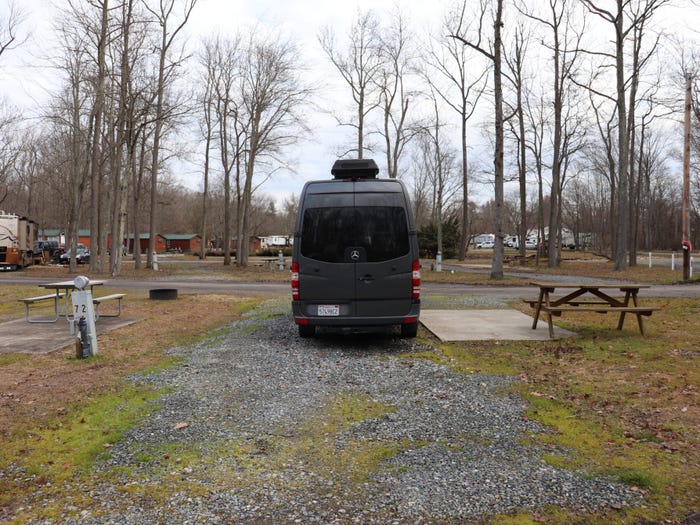 “I took a short road trip in a camper van during the winter and was disappointed with my experience,” says Frank Olito writing for Insider.com.

Olito rented a Class B luxury Sprinter van for an impromptu road trip from New York City to Philadelphia. He wrote a listicle about his asphalt voyage, contrasting his mishaps to the carefree “idyllic van life” he expected from social media.

Here’s the Insider article. Go read it. Then come back here.

Now, I don’t have a problem with muckraking. But I was disappointed in Olito’s … well, disappointments. The article could well have been titled, “Negative Ned Goes Camping – and You Already Know What Happens Next!” On behalf of my fellow adventurers and travelers, I feel the need to add some context.

By the way, Frank, if you’re reading this, give van camping another shot! There’s another side of van life I think you’d love to see.

There were 13 complaints in Frank’s article. Let’s work through them.

(P.S. All the photos in this article are from Frank’s original article at Insider.com. I take no credit for them. If you click on one of these photos, you’ll be redirected back to the original article.)

Response to 13 Things that Disappointed Me About Van Life

“Before renting a camper van for a weekend road trip from New York to Philadelphia back in January, I was expecting a scenic journey with some carefree adventure.” 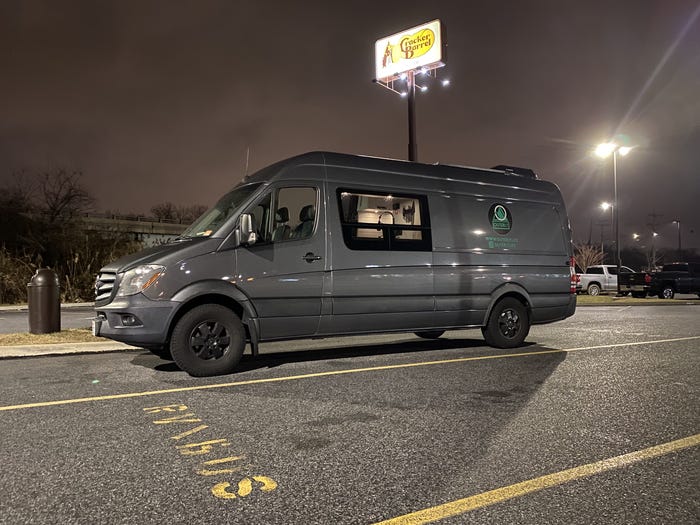 Well, Frank, that was your first problem! You traveled across the Mid-Atlantic (also known as the Ice Coast) in January. That’s the dead of winter, my friend. 6-lane turnpikes, gray permaclouds and naked oak trees don’t make for a very scenic trip, now do they?

Nomads follow the good weather. Come the end of October, smart van lifers shift into Drive and head south! Or winter-lovers head for Vermont, the Smokies, Aspen, or some other winter wonderland. No one hibernates in the drab, bare eastern forests.

“Sleeping overnight at a parking lot is less than ideal, especially when it’s near the dumpsters.” There’s an art form to stealthy public parking. Park under a tree, facing away from a street light, off to the side but not in the dank far corners. Stay undercover – but don’t look like you’re undercover. And if someone knocks, be honest about who you are and why you’re there.

And never park next to the big trucks! That diesel rattle will keep you up alllll night.

“During the winter, empty campgrounds are another popular option for vanlifers, but they can get expensive.”

Frank parked at a KOA, which made me giggle. Most nomads don’t park at KOA, which is rather infamous for catering to noisy families over the weekend.

Many KOA campgrounds (and almost all other campgrounds) offer significantly discounted rates for long-term stays. His actual rate would likely have been around half the standard (around $800 – $900), and many RV campgrounds discount the price even further. I know of well-maintained campgrounds that offer seasonal monthly rates of just $350!

You can usually get weekly rates, too, although the discounts aren’t quite as good. 50A sites cost more than 30A sites.

“Parking a camper van in a city is also a challenge.” 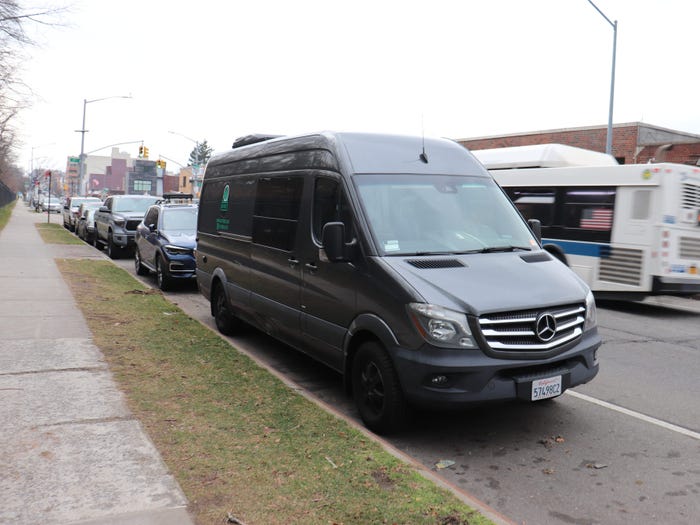 Poor Frank. He tried to pilot and parallel park his 24-ft Mercedes Sprinter van through Philadelphia, Pennsylvania. That’s a challenge even for an experienced driver!

Public transportation, Frank! We live in an era of Uber, Lyft, buses, metros, subways, Amtrak, shuttles, taxies and more. In my nomad days, I even used roller skates, bikes, and scooters to get around the concrete jungle.

#Vanlife could also be called #walkingeverywherelife, because you’ll get your steps in! That’s part of the appeal. You don’t have to work out to get fit; nomadic life demands physical effort from you.

If you do enjoy physical fitness, though, here are some tips for staying fit while on the road.

“Although most photos show vanlifers opening their back doors onto beaches, the reality is far from that.” This is a self-fulfilling prophecy. Rather than journeying from NYC to the snow-covered White Mountains or even the local campground on Sandy Hook Beach, Frank parked his vessel at a KOA on the outskirts of a major urban hub during the off-season. Most of the outdoor facilities, like the pool, were closed.

To be clear, vanlife isn’t all Bahama beaches and Rocky mountains! Yes, there are mornings where it’s just asphalt and bird poop. But vanlifers don’t just hang out in off-season campgrounds waiting for the groundhog to ignore his shadow. They follow the weather!

You can learn more about fulltime RVing myths here.

“Sometimes the view is just a parking lot.” Frank parked at a Cracker Barrel once during his transit. Frank complained about the view, but one man’s trash is another man’s treasure!

There’s an All-American breakfast waiting for him just 30 feet from his front door! How awesome is that?

A big part of nomadic travel isn’t just the views; it’s the cultures. Enjoy the restaurants; talk to strangers; look up local festivals; visit the Chambers of Commerce. You wake up surrounded by a new world every morning. It’s a chance to stretch your mind. “What would life be like if …?”

“It may seem easy to operate a camper van, but there are a ton of systems to learn and troubleshoot.” This one goes to Frank. He’s right. RVs and vans are complicated to operate. You’ll become a talented handyman after owning an RV! As the old saying goes, “The only thing that works on an RV is the owner.”

But that’s one reason I own and operate AskTheRVEngineer.com, which demystifies and deciphers RV ownership and maintenance. 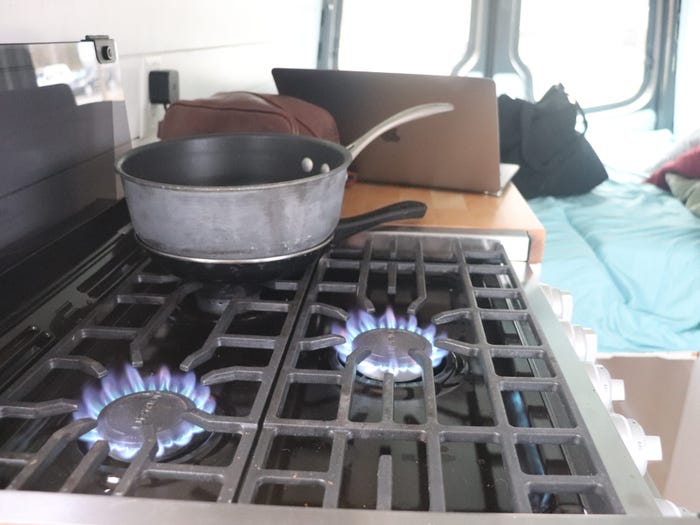 Frank’s furnace stopped working. And his first problem was he didn’t have the first clue how to fix it himself. As I said above, if you want to live the van life, you gotta ante up! In the same way you mow the lawn, scrub the floors and run the furnace in your house, so you must maintain an RV.

Frank’s fix was to run the stovetop burners to generate heat. Other possible solutions would be to operate a catalytic propane heater or run an electric space heater off an inverter.

“The windows of camper vans are constantly filled with condensation in the winter.” But yes, windows often do fog up. You can get around most of that with a collapsible window blind. Or wipe ‘em down with a towel, and clean off the smudges once a week.

“The bathrooms on some camper vans are so unbelievably small.” Again … Frank 1, Me 0. He’s right. It’s one reason I wrote this article about whether or not you need a bathroom in your RV!

“The composting toilet is a major and unsanitary hassle.” This issue is … complicated. Many RVs and vans don’t use composting toilets; they use regular gravity flush toilets and black water tanks.

A well-maintained composting toilet system shouldn’t smell bad. If anything, it should smell kind of hummus-like. If Frank’s van didn’t have a ventilated composting system, that could be a reason for the odor.

Some travelers don’t even use a bathroom. Public restrooms all the way!

“Making the bed in a camper van isn’t easy.” Frank is not wrong! Making your bed in an RV is a full-body cardio workout. This is a big reason van nomads debate so fiercely whether you need a fixed or fold-up bed.

If you have mobility issues, I invite you to check out this guide for choosing a handicap-accessible RV.

“Although vanlifers get very creative about storage, space is still very limited.” Frank packed a duffel bag and backpack for the weekend, which filled up the available onboard interior storage. “I couldn’t imagine fitting my entire life into the limited storage space even if I did downsize most of my belongings,” he admitted.

But yes, #vanlife does require sacrifice. You’ll have to give up some comforts.

There’s one more problem with Frank’s analysis: He only tried it for a weekend.

You see, living on the road is a life of high highs and low lows. No lie – some weekends stink. Some weekends, it rains, the shop owners go on holiday, the fridge lost power and the whole van smells like rotten chicken, and you can’t find your favorite pair of socks. If you think you had it bad, Frank, you haven’t seen anything yet!

But the good days … well, they make the bad days worth it.

And to be honest, maybe Frank Olito wasn’t really cut out for #vanlife. Maybe he’s more of a Class C + dingy vehicle kind of guy. That’s the great thing about RVs: There’s one for every lifestyle. You can even become a nomad with kids!

Try out winter #vanlife in Stowe, Vermont, Frank – and make sure your heat works this time – and I think you just might enjoy it.

Get rid of the mugs, though. 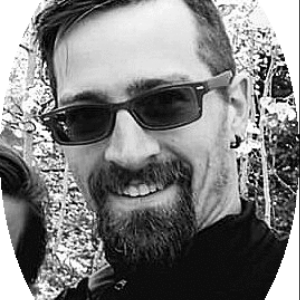 What No One Tells Newbies About Winter RV Camping

5 Van Life Myths Debunked – And 5 That Are Totally True!

Smackdown: Why You Should Consider a Truck Camper Over VanLife

Top 9 Takeaways from Renting a Camper Van with Outdoorsy